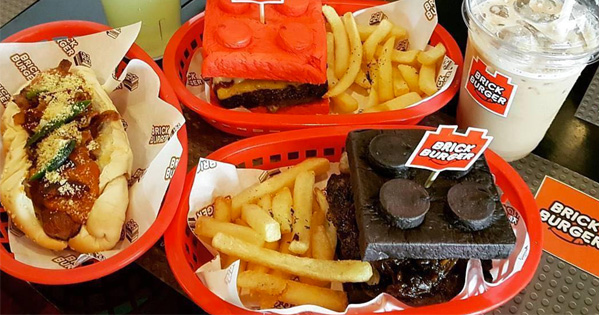 If You Like LEGOs, You'll Love This Clever And Colorful Restaurant

Read on to learn more about this crazy cool LEGO-inspired restaurant that recently opened in the Philippines!

It’s pretty tough to image a childhood without LEGOs. The stackable, buildable blocks have been around for decades, prompting children’s creativity and provided hours of entertainment. The 1949 invention was so popular that they even created LEGOLAND, a whole interactive world made from the pocket-sized blocks. If you think that’s cool, than this next fact will blow your mind: there is a LEGO-themed restaurant, too!

This Philippine restaurant is aptly titled Brick Burger, and it seriously one amazing spot. The recently-opened joint specializes in brightly colored burgers with buns in the shape of LEGO blocks! Brick Burger’s owner, Jergs Correa, wanted to theme a restaurant after the popular toy, and it’s safe to say that he’s found success.

The creative restaurant features 10 different styles of burgers, and the colorful buns aren’t the only cool thing about these treats. Brick Burger offers the classic take on a cheeseburger, but they also have crazy menu items like a burger with mac n cheese on it, and another with onion rings and BBQ sauce.

There’s a even a black bun for the “Darth Burger”, which features caramelized onions, mushrooms, bacon, and BBQ sauce.

While the restaurant isn’t officially sanctioned by the company, it’s pretty clear where the inspiration comes from. They even offer an array of LEGOs at each table to play with. This place is all about letting out your inner child, and we can’t get enough!

Brick Burger is gaining some major attention for its unique spin on the classic patty. Both adults and kids alike are flocking to the fun restaurant to eat, play, and of course, take pictures of these crazy cool meals! Hopefully we’ll be able to enjoy a Brick Burger in the United States someday!

What do you think about this restaurant and it’s LEGO-themed food?