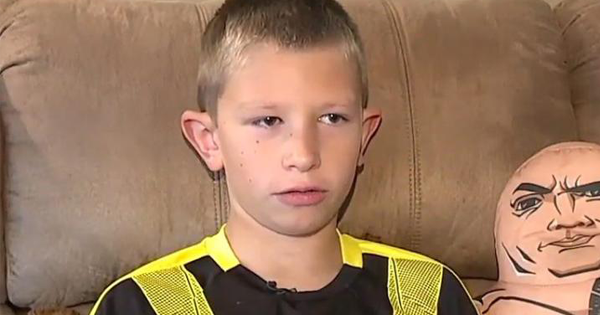 10-Year-Old Boy Saves Brother's Life With Moves He Learned From His Favorite Movie. Then He Gets A Surprise Call From His Celeb Hero

A 10-year-old boy got to meet Dwayne "The Rock" Johnson after using chest compressions he learned by watching "San Andreas" to save his brother's life. Read on for more details!

A 10-year-old boy who saved his brother’s life after watching a movie that stars Dwayne “The Rock” Johnson is finally getting the chance to meet his hero.

Jacob O'Connor recently made headlines when he sprang into action last month after spotting his brother face-down in their grandmother’s swimming pool.

Being just 10 years old, Jacob is not trained in CPR, but he reportedly learned how to perform chest compressions by watching the 2015 action-thriller San Andreas, starring Johnson.

“I ran outside and pulled him out the pool and gave him compressions,” he told Inside Edition.

Jacob’s grandmother immediately called 911 to get help for her grandson while Jacob continued to perform chest compressions on his brother.

“It was horrific,” said Jacob’s grandmother, Ellen Viau. “It was the worst day ever.”

Thanks to Jacob’s bravery, his little brother, Dylan, 2, only had to spend one day in the hospital to recover.

When news of Jacob’s heroic actions made its way to Johnson himself, the always friendly celeb quickly reached out to the courageous boy.

In fact, Johnson personally invited Jacob and his family to travel from their home in Detroit to visit the set of his latest film, Skyscraper, in Vancouver.

The moment Jacob showed up to the set, Johnson began praising the young boy on Instagram.

“Jacob was super nervous and shy the whole time we hung out, so it was fun getting him to laugh and talk. He threw me for an unexpected spin when he showed up on set wearing a shirt that he proudly made with my bull insignia on the front and on the back was the picture of me holding our two puppies, Brutus and Hobbs, after I rescued them from our pool. Seeing that picture on this boy's shirt, got me in the gut. Eventually, we would lose Brutus to heaven, but it wasn't the picture of Brutus that made me tear up, it was the fact that this 10yr old kid, had a heart big enough to put our puppies on his shirt after he saved his little 2yr old brother's life. What a special day. What a special kid. Thanks Jacob for being awesome and for being the kind of person we all aspire to be. ~ DJ,” he captioned one sweet post.