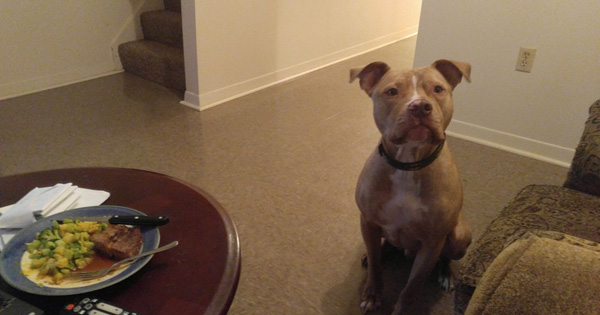 Read on to see how this woman sparked some serious conversation about sexual assault victims using a photo of her well-behaved dog.

As tragic and unfair as it is, victim blaming remains a part of today’s society. Too many times, when a woman is sexually assaulted, she is asked what she was wearing, how much she was drinking, and other ways she may have “provoked” the attack. It is situations like these that often cause women not to speak out, letting their attackers go free. One of the best ways to stop the cycle of victim blaming is, of course, education. Helping people to understand the dangerous effects of victim blaming will hopefully put things into perspective, and change the way they treat the victims.

Bree Wiseman helped put victim blaming into easy-to-understand terms by posting a photo of her dog. What do assault and a Facebook user’s dog have to do with one another? Once you read her clever post, you’ll completely understand.

In Bree’s photo, you can see her dog sitting beside the dinner table. Bree is enjoying a large steak, which you can see on the table and eye-level with her dog.

“To the people that say women get raped due to the way they are dressed. This is my dog. His favorite food is steak.” she writes. “He is eye level with my plate. He won't get any closer because I told him no. If a dog is better behaved than you are, you need to reevaluate your life. Feel free to share, my dog is adorable.”

Simple, straight, and to the point- Bree’s post clearly shows that “no means no” and if a dog can understand that, a human should be able to as well.

People were quick to not only commend Bree for the intelligent analogy, but also compliment her adorable pooch.

Bree, who is 22 years old, continued the conversation with the Huffington Post, saying: “If a 4-year-old pit bull understands the word ‘no,’ even though he is looking at something he wants so bad he is literally drooling, then adults should understand ‘no,’ no matter how the other adult is dressed. Appearances shouldn’t make any difference in sexual assault cases,”she said. “How is it that a simple-minded animal has the ability to understand better than a large part of the adult population?”

“The only person to blame in a rape offense is the rapist. It was their decision to rape. People shouldn’t have to worry about what they chose to wear for fear of rape. I want people to see that this is a problem, and to stand together against victim-shaming."

What do you think of Bree’s post and comments on victim-shaming? Do you agree?