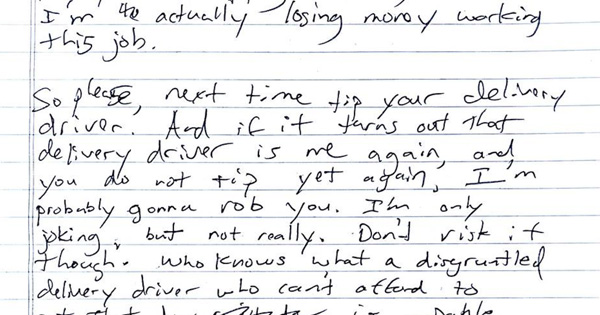 Read on to see the alarming letter this disgruntled delivery driver left a woman after she forgot to tip him $4.

We all know how important it is to tip your server when you go out to eat, or if you order food for delivery. This is a big part of how restaurant and delivery staff members make a living, and it has become a crucial and expected part of dining out. Not everyone tips, or is a good tipper for that matter, but usually things even themselves out, thanks to the generous tippers of the world. When someone is stiffed a tip and doesn’t get any money at all, it can be frustrating for sure, but there’s nothing you can really do about it. That is, unless you’re like this delivery driver.

One Postmates delivery man brought over a pizza for Lauren Ledford, and she mistook the delivery fee for a tip, which happens from time to time. Instead of letting the issue go, the Postmates worker left her a 4 page letter shaming her for not leaving him a tip, and even threatening her for what she had done.

Shocked and even afraid, Lauren shared her frightening story on Facebook to let people know what had happened to her.

“Yesterday, I came home to a 4 page letter left on my door from a @postmates delivery man. These are the last two pages, and the scariest.” Lauren wrote, along with 2 photos of the letter the driver left.

“I know he is employed by this company because the only pizza delivery I've had to my home in the last 2 months is from @postmates and in the first two pages (not pictured here) the man let's me know he was at my home last week delivering pizza.” she continued.
The words in this man’s letter are extremely troubling:

“So please, next time tip your delivery driver. And if it turns out that delivery driver is me again, and you do not tip yet again, I'm probably gonna rob you. I'm only joking, but not really. Don't risk it though. Who knows what a disgruntled delivery driver who can't afford to eat that day is capable of.” part of the letter read.

Oh, I forgot one thing...wait, no I didn't. I'm just kinda high and so, I need your tip money to stay toasty. If I had big t**s and a nice a** I'd just whip out my t**s and/or shake my booty and get all the free drugs I could ever want. Sometimes I wish I was born a woman so I could take advantage of men like that. Then I remember that I don't need to sit down to pee everytime or bleed out of my a** for a week every month and calm down. Cuz having a weiner has its advantages.”

After reading this, it’s easy to see why Lauren is so concerned. In addition to using vulgar language, admitting that he was under the influence, and making a anti-semitic and sexist remarks, the driver also threatened Lauren, and he knows where she lives. Lauren alerted the police and distributed the hand-written letter to them, so hopefully everything is getting taken care of properly.

“I am putting this out there only because I want everyone to be aware of the fact that apparently this company doesn't respect a privacy policy and employees people who are openly on drugs, returning to costumers homes a week later threatening to rob them over a $4 tip, which I thought was included in the outrageous delivery charges that this company tacks on to orders. I am now terrified that this man could show up any day.” she wrote.

Understandably, people were concerned themselves after seeing what this delivery man had done. Hopefully law enforcement and Postmates are handling the situation efficiently so Lauren and other potential customers don’t have to go through anything like this again.