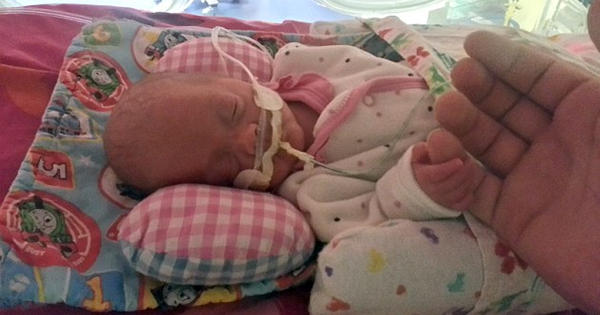 When Baby Girl Was Born, She Weighed Less Than A Loaf Of Bread, But Her Parents Refused To Give Up.

When doctors told them to pull the plug, Faith's parents said no - twice.

When Faith Snell was born, it sounded like one of those stories with no good ending.

She was delivered at 25 weeks, and she weighed 1 pounds, 2 ounces. She suffered a brain hemorrhage during the emergency caesarean delivery.

It was a grade four IVH—the most severe hemorrhage possible. She’d lost 60 percent of function in the left
side of her brain.

From the beginning, Faith’s life was tough. She spent six weeks in intensive care, during which time doctors told her parents to pull the plug on her life support twice.

She wouldn’t live a full life, they said. She’d be severely disabled. And even if she wasn’t, the cost of helping her live would be too great.

“They said that if it was their child, they would turn the machine off,” said Faith’s mother, Leanne, “Because she would not walk or talk or have any quality of life.”

But, like so many hopeful parents, they didn’t listen.

Faith pulled through, though she’s mostly paralyzed on the right side of her body.

But she’s doing much better than anyone anticipated. Faith can walk and talk, and is now approaching her third birthday.

She learned to crawl by the time she was one, and was taking her first steps around her first birthday. They also told her parents that she’d be on oxygen for the first four years—but the week after they brought her home, she was taken off of oxygen to breathe on her own.

And her mother, Leanne, is a little angry.

“Seeing how well she has done now, I feel angry and sad that they even gave us the option[to turn off life support]. If we did we wouldn’t know what we do now. Every time Faith does something new I think, ‘If I’d turned the machines off I never would have seen this.’”

It’s not all perfect, of course.

“She is a bit clumsy and she gets frustrated with things like eating because she can’t use her right hand so she can’t feed herself.”

But with time, she will be better. The doctor even says that she’ll end up going to a normal school and living a normal life.

And Leanne wants parents of children with hemiplegia to realize that there’s hope. Brain hemorrhages are not as limiting as they think. “It is not all bad,” says Leanne.