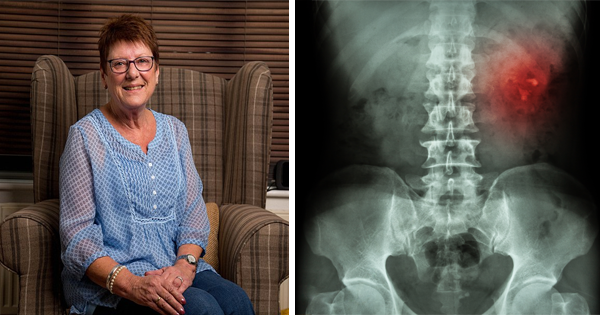 When Her Doctors Diagnose Her With Kidney Cancer, She Immediately Fears For The Worst. But Then She Hears How They Plan On Treating Her.

When Gerry O’Neill learned that she had kidney cancer, several things immediately sprung to mind: the health of her sister, who had received one of her kidneys, and how long she’d have to receive dialysis and wait for a kidney transplant. But her doctor reassured her that none of these worries were at all necessary.

Last April, after 66-year-old Gerry O’Neill underwent an operation to unblock one of the arteries in her chest, she was told by her doctor that there was abnormal swelling on her kidney that they would need to further investigate.

O’Neill immediately asked if they suspected it was cancer. “We think so,” her doctor replied.

When the scans came out, there was no way to deny it. O’Neill had kidney cancer.

Her first thought wasn’t of her own recovery, but of her sister’s health. 12 years ago, O’Neill had donated her second kidney to her sister, and she feared that the organ had a higher chance of developing kidney cancer because it came from her body.

Thankfully, O’Neill’s sister showed none of the same signs of cancer and was deemed well by her doctor.

O’Neill then began to prepare herself for her long journey ahead. The tumor on her kidney was 7.3 centimeters large, and she figured it would have to be removed. After the operation, she’d have to go on dialysis for the rest of her life and wait for a kidney transplant.

But her doctor came back with contrary news – and good news.

There was a new procedure doctors were pioneering to treat kidney cancer. Rather than completely remove the organ from the patient’s body, they would remove it – just for long enough to surgically remove the tumor – and then replace it back in the body, in a different position.

When O’Neill heard of this new, simpler potential to treating her cancer, she leapt at the opportunity. She had already watched her sister’s struggle and knew she didn’t want to go through it herself.

In August, O’Neill went under the knife for eight hours to have the keyhole operation done. The entire procedure went smoothly, and just eight days later, O’Neill was allowed to return home.

She – and her sister – are both incredibly pleased with the results and are hopeful that O’Neill will be able to resume her full range of normal activities in due time.