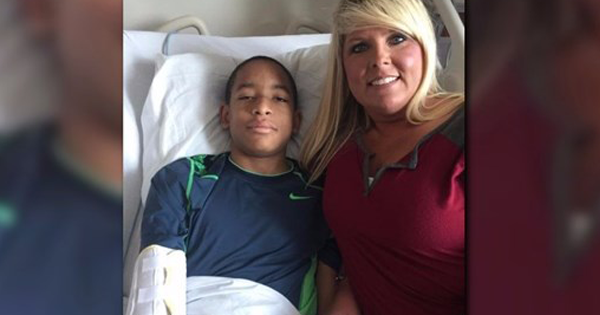 He's About To Be Sent Home, When All Of A Sudden, The School Nurse Notices Something Others Don't

A school nurse is being praised for her heroic actions when she saved a young boy's life. Check out the story now!

When Carrie Stephenson showed up to her job at West Bemis Middle School last Friday, she was expecting an ordinary day.

Instead, she ended up saving a boy’s life.

According to ABC10, Stephenson, a nurse at the middle school, had been called to the hallway to help 13-year-old Isaiah Griffin, who had been vomiting.

At first, Stephenson assumed that Isaiah had the same stomach virus that a few other kids had, but she just knew something wasn’t right.

Isaiah’s vomit didn’t look normal, plus he kept swaying while his eyes started to roll into the back of his head.

“I honestly thought he was fixin’ to die,” Stephenson said Monday.

Stephenson immediately insisted that Isaiah be rushed to the hospital, instead of being sent home with his mom to rest.

When they arrived at the hospital, Isaiah’s family learned that Isaiah was having a stroke from a blood clot that was just an inch away from his brain stem.

Thanks to Stephenson’s quick-thinking, Isaiah was treated right away and his outlook is pretty good, though he may need some physical and occupational therapy after having the clot removed.

“This is going to be one of the best Christmases. Ms. Carrie has given me a gift,” Isaiah's mother, Deborah Griffin, said Monday. “It’s just the most precious gift she could have given me."

“Her thinking and everything she did for him saved his life, I tell you what,” she continued. “We could’ve been planning a funeral, not planning a celebration.”

Stephenson, who has been working at the middle school for three years, says this is the most serious situation she’s ever had to deal with.

“To me it was just the grace of God showing through. God was all over that,” she said.