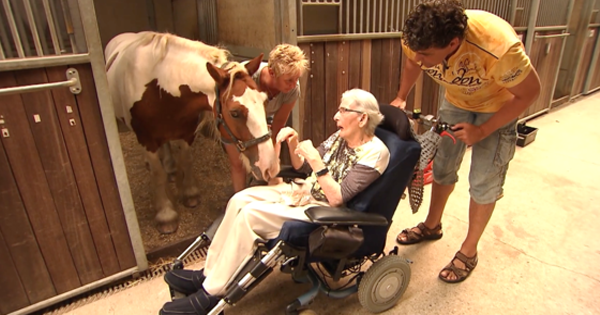 After Parkinson's Takes Away Her Ability To Ride Horses, Her Dying Wish Is To Ride One Last Time

87-year-old Nelly Jacobs used to be a show jumper when she was younger. She’d always had an incredible connection with horses and won many awards. Then Parkinson’s disease took away her ability to ride.

Nelly Jacobs spent much of her youth with horses. She’d begun riding at a young age and very quickly became a skilled show jumper. She went to many competitions and won quite a number of awards.

Jacobs had planned on riding for much of her life, but her physical health had other plans for her.

In her early 50s, Jacobs began to exhibit signs of early Parkinson’s disease. This medical condition affects the nervous system and is often noted by body tremors, loss of balance, and difficulty of movement.

Jacobs’ doctors quickly diagnosed her condition and said that she would no longer be able to ride as the disease progressed.

Now, Jacobs is 87. Her dying wish is to ride a horse one last time.

Although Jacobs is far more frail than she was 30 years ago, two charities came together to make her wish come true. The Care Group and the Green Cross worked to create a specially made carriage that could be slung across the backs of two horses.

Charity volunteers were then able to gently lift Jacobs from her wheelchair and transfer her to this unique seat on the horses’ backs.

The soft material of the bed allowed Jacobs to feel the horses moving beneath her, so although she wouldn’t be able to sit astride the horses’ backs, she could still feel the familiar motion and rhythm of their feet.

It’s impossible to deny that Jacobs’ face is filled with complete and utter joy at this one, final ride.

You can watch the original clip of this moment here. (Note: It’s not in English)